What I did on my Christmas vacation 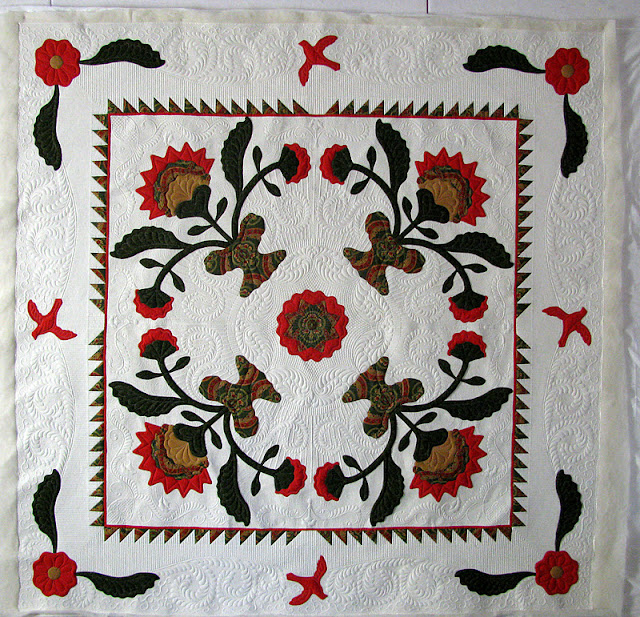 I finished Ann's quilt!  It took a long time to quilt, but that was my choice Ann, so don't feel guilty.   I used two cones of Superior Bottom Line thread - that's 6000 yards and a lot of that ended up in the garbage can.  I swear I ripped out more stitches than I put in. 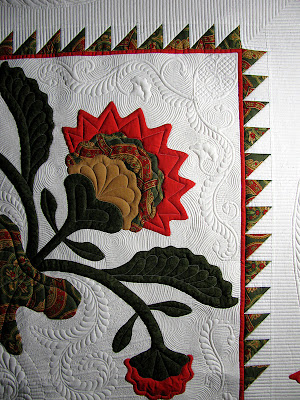 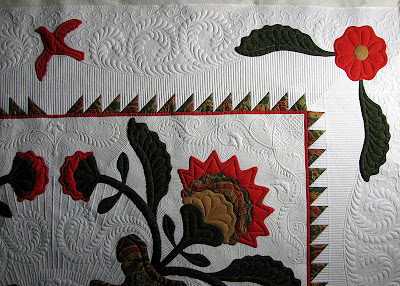 This is the first time I have used two batts, a thin cotton and Hobbs wool. I like the way it looks but it sure makes for a heavy quilt. 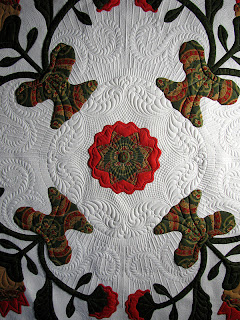 The cross hatching in the center took especially long.  I drew the design first and didn't have a ruler that exactly matched the curve I needed.  I had read about someone who made their own templates using three layers of kiddie craft foam that are glued together.  That sounded like a great idea so I bought some and cut a template - I could cut it with scissors and it was like cutting through butter.  Unfortunately, it was about as useful as a template made out of butter; it was so soft that the foot kept mooshing up against it making a wobbly line.


I was afraid I was going to have to do something different in the center and it was really my favorite part so I hated to change it.  Peter suggested trying 1/4 inch balsa wood so we tried that.  It also was soft and easy to cut with a craft knife but held up a little better when I used it to quilt.  Still, I killed a few but it was for a good cause.  (I named them too)  It's not a technique I recommend!

The quilt is so heavily quilted that from the back it looks like a wholecloth quilt. 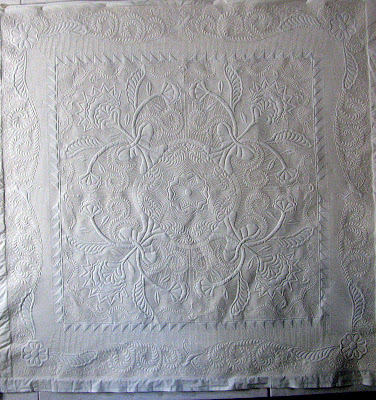 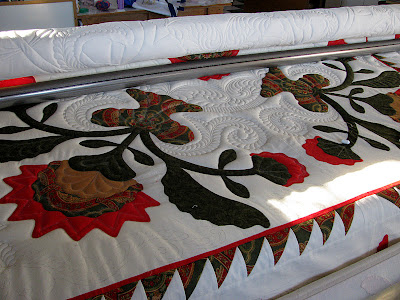 In the midst of Christmas Craziness I haven't had time to post.  Now the shopping is done, the presents are shipped and I'm back to trying to finish Ann's quilt.  I promised it to her before Christmas but I will be lucky to finish it by New Year's at this rate.  Here is a picture of it on my machine before I started the background quilting-  I always forget how long it takes to do heavy background quilting.


Ann invited me to join her group to do some dyeing at her house.  She had everything set up and totally organized (her Nurse genes were showing)  I tried to take pictures of the group and in them Ann was always blurred, always in motion!  I ended up with some nice fat quarters that I will use and a few real dogs that will make good rags.

Speaking of dyeing, I mentioned that Sheri's beautiful Storm at Sea quilt bled when she blocked it.  Many thanks to Vicki Welsh who responded to my request for suggestions. She referred us to one of her previous posts about hand-dyed fabrics bleeding; http://vickiwelsh.typepad.com/field_trips_in_fiber/2011/08/color-fastness-of-hand-dyed-fabrics.html and as an experienced hand-dyer had some really helpful ideas.


Sheri ended up soaking the quilt in her whirlpool tub in hot water with Synthrapol.  It took several long soaks but the quilt came out 99 % clean with just a few very faint shadows from the blue fabric bleeding.
Thanks again, Vicki!  Here's a happy Sheri with her finished quilt: 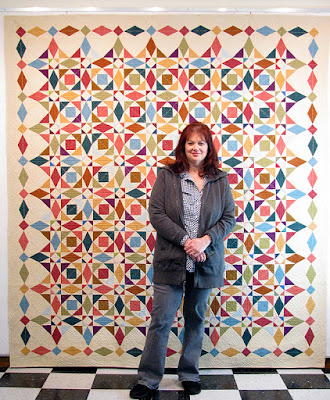 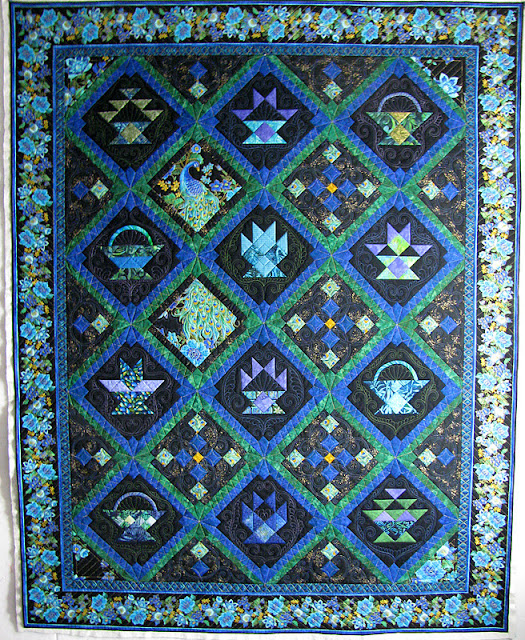 This is Charlotte's quilt for her shop's Saturday Sampler.  You can see her newsletter here.  Charlotte likes traditional style quilting, with cotton batting and light colored thread.  When I asked her if I could use metallic thread on this quilt she turned pale green  but told me to do whatever I wanted.  What trust!

I love the colors of this quilt and wanted to use gold thread along with purple, green and blue. It's a bit over the top but I like it and I think Charlotte does too.  The metallic doesn't show up real well in the photo but does in person! 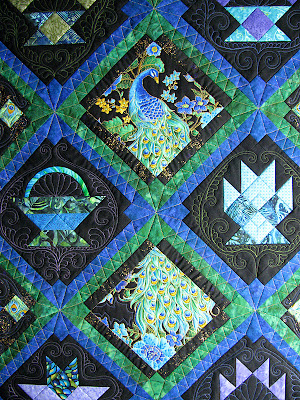 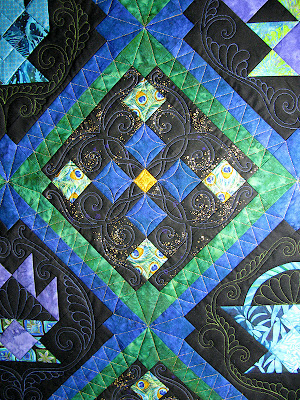 I have been putting a four inch hanging sleeve on my miniature Itty Bitty Boutis before sending it off to Road to California - this was a last minute request from them.  It seems a bit crazy to me on a miniature quilt - my quilt is about 18 inches long, but some miniatures are only 8 - 10 inches and a four inch hanging sleeve will just about cover the back of the quilt!  But - it's their show so I obliged.
Posted by Jan Hutchison at 3:32 PM 4 comments: 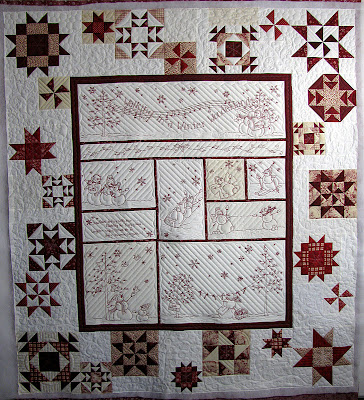 I finished Karen's Winter Wonderland quilt in time for Christmas.  (This is a Karen from my guild here in Wichita, not the Karen from Texas in a recent post) She does such a nice job on the embroidery that I really hate to quilt over it, but if I don't it will look saggy baggy and awful.  I usually just do cross-hatching or straight line quilting over the embroidery, but I really hated to quilt over those cute fat snowmen! 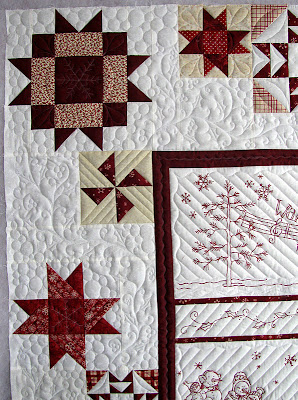 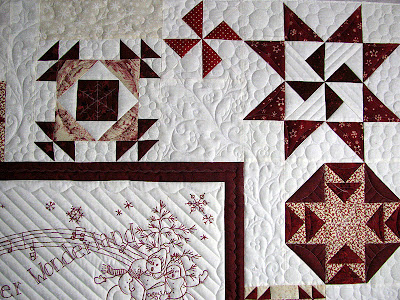 I decided to quilt around the snowmen and put the straight line quilting behind them.  Once I get quilting my brain tends to drift off and I find myself thinking about what's for dinner, quilts I want to make, errands I need to run etc. and sometimes that gets me in trouble.  I found I had quilted right over this poor little guy - doesn't he look like he's been run over? 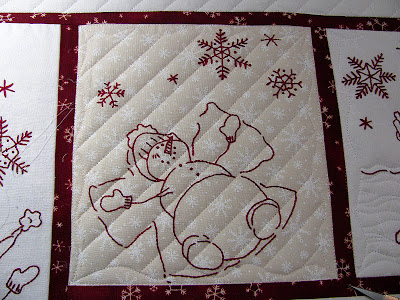 I picked out a few stitches and here he is all plump again. 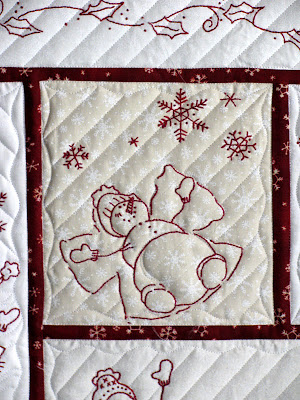 One more quilt to finish and I'm on vacation! 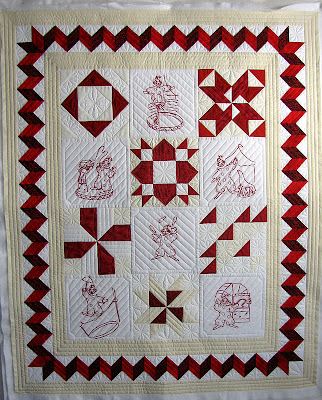 I think Sylvia told me she didn't make these embroidered blocks, just set them in this cute quilt.  I love the zig-zag border.

Usually I think clowns are scary, but these clowns look pretty friendly. 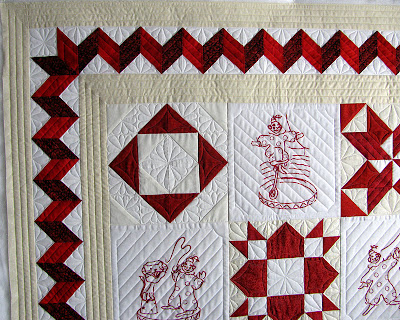 Sylvia also made this wallhanging from  a pattern by Edyta Sitar. 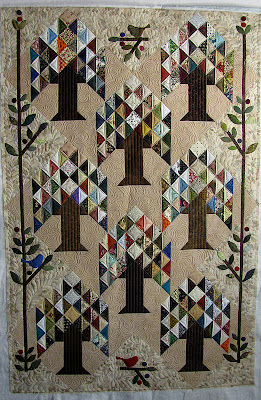 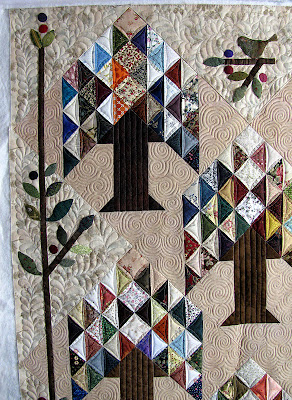 It's suddenly COLD and nasty here in Kansas, I guess winter is coming.  Hard to believe that
last July when we were having  weeks and weeks of temperatures over 100 degrees I looked forward to this.

I get to meet Karen, at last! 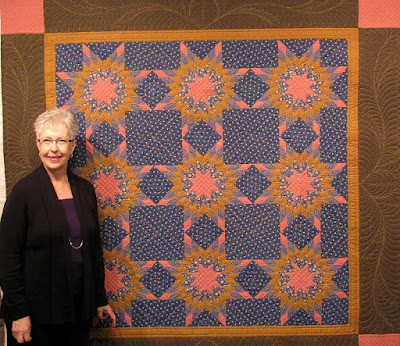 I have quilted four quilts for Karen over the last few years and I finally got to meet her!  She lives in Texas, our connection is through her cousin Lynn who is also a quilter.  She came by to pick up her quilt and meet me - I'm so glad she did! 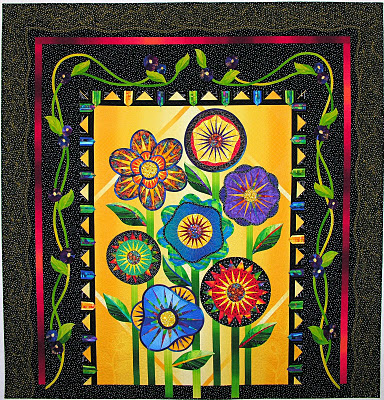 Not so happy is the story of this quilt, Really"Wild"Flowers: Second Season by Sharon Schlotzhauer.  I met Sharon in Colorado Springs where we were both members of Piecing Partners Quilt Guild.  Sharon and I both started entering shows at about the same time and I have kept an eye on her and her quilts since I left Colorado.  She has been winning many ribbons for her beautiful quilts: her Really "Wild" Flowers quilt has won awards in Knoxville, Road To California and Houston.  Sadly,it also disappeared in Houston after the show was taken down and before it was shipped home.

She told me she is heartbroken to lose her quilt, she felt it was the best work she has done.  I always worry about my quilts when they are shipped, I figure that is when they are most vulnerable and I breathe a sigh of relief when they reach their destination.  It's frightening that this quilt was lost in Houston, where they take such care with the quilts. The quilts we enter in shows have so many hours of thought and work and love in them, they are practically members of the family by the time they are finished.  I can't imagine how awful it must be to lose one.

Anyway, keep a watch out for Sharon's quilt: it is listed on the Lost Quilts site  http://lostquilt.com/and there is a lot of talk about it now on the Internet.

Here's more bad news: Sheri's beautiful Storm at Sea quilt from several posts ago bled when she wet it down to block it.  This was after prewashing all the fabrics twice with Synthrapol.  The Cherrywood website suggests washing it again, more than once if necessary with Synthrapol.  Any suggestions?