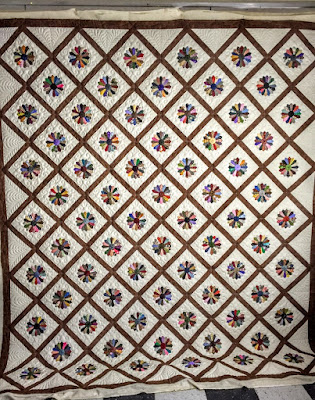 This is Judy's scrappy Dresden plate quilt - she plans to use it on her bed and didn't want it heavily quilted.  Usually I do SID on a custom quilt but because this is a large quilt it would have added a lot to the price.  Judy decided to have me do custom without SID.  I think it worked well, with the wool batt the quilt looks warm and puffy and will make a great bed quilt.  Not every quilt needs to be quilted to death. 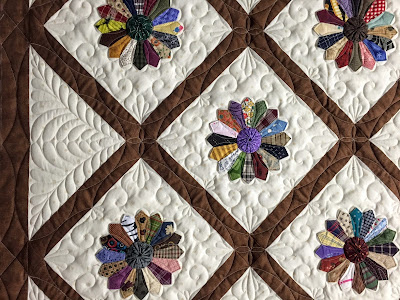 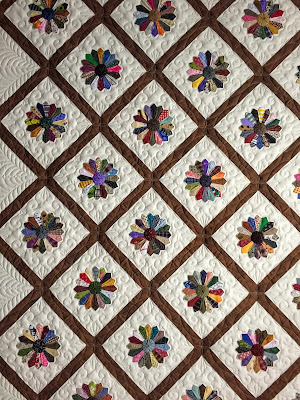 Speaking of quilted to death, I think I have never posted pictures of the latest show quilt Gail Stepanek and I finished.  I wanted to wait until it had been in a show and then forgot about it.  This is Cache of Carats, so named because Gail hand pieced the entire quilt from diamonds.  When she first started sending pictures of it to me as she worked on it I was stumped on how to quilt it.  For one thing it is hand pieced and all the seams are pressed open which rules out any SID.  It is also asymmetrical and I'm so used to nice symmetrical traditional quilts that it hurt my brain coming up with a quilting design. 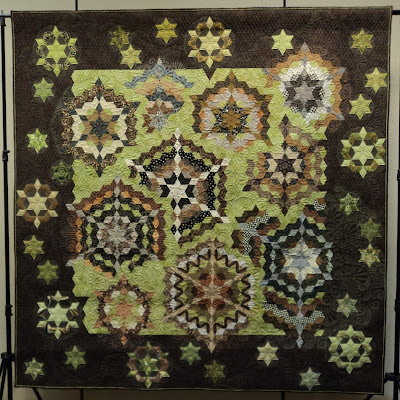 I finally decided to treat all the starbursts as circles and cut out snowflake-type designs to quilt over them.
It was messy but fun cutting them. 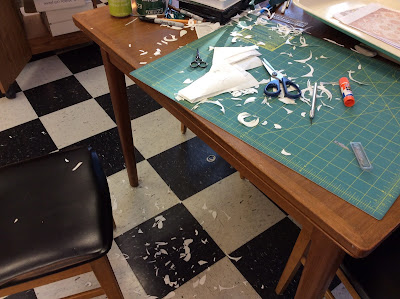 In a rare moment of brilliance I decided to cut them out of freezer paper.  That meant that when finished, I could iron them to the front of the quilt top for marking, rather than having to trace through the top with a lightbox.  I used about a dozen white Clover markers marking this quilt.  It showed up well on the brown but the fabric in the starbursts is too dark for a blue marker to show up and almost too light for the white marker.  I had to go over and over the lines to get them to show up. 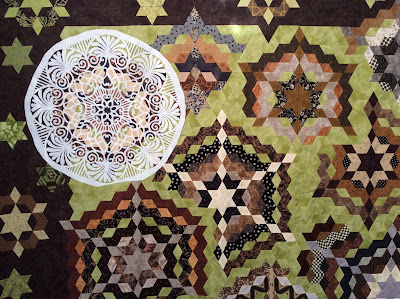 I then quilted the starbursts with different colors of metallic thread. 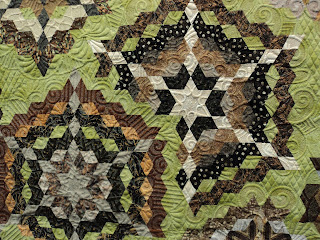 The borders I quilted with Masterpiece cotton thread in a diamond pattern, appropriately enough. 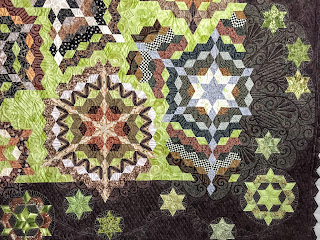 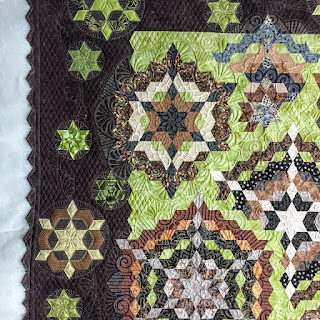 Gail and I are pleased that this quilt just won a third place ribbon at Road to California.
Posted by Jan Hutchison at 5:39 AM 7 comments: 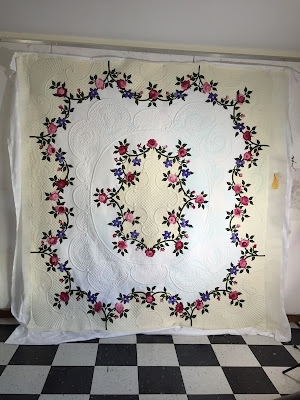 It took Barb five years to finish the applique on this beautiful quilt and she wanted it quilted with a traditional custom design.  She wanted trapunto but didn't want to use two layers of batting, which makes for a stiff, heavy quilt. We did cut-away trapunto which leaves the quilt with a wonderful soft drape so it still works as a bed quilt.  I sewed the trapunto with soluble thread and then gave the quilt back to Barb to trim.  She did a great job and managed to avoid snipping a hole in the top - that's the danger with this kind of machine trapunto. It was worth it in the end although it meant the quilt had to be washed and blocked to remove the soluble thread and blue marker.  That caused some worry for Barb because despite prewashing her fabrics three times and going to great lengths to prepare them, she had some bleeding from the pink and red fabrics.  Luckily, washing with Synthrapol took care of it. 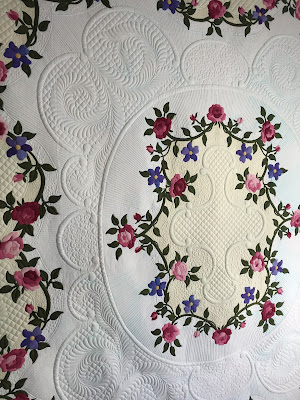 Barb has a collection of patterns which came to her through her family.  This quilt was designed by a woman that lived in Kansas City  in the 1930's  at the same time that quilters like Rose Kretsinger and Charlotte Whitehill  in Emporia, KS were famous for their applique designs. The patterns are hand drafted and hand colored - a real treasure for Barb, who does wonderful applique. 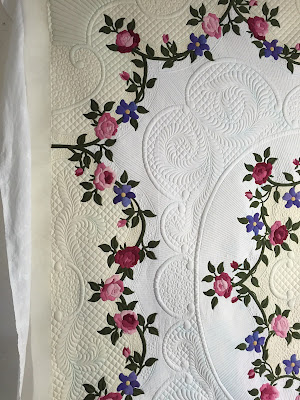 This took serious marking and SID but it was worth it in the end - it's a gorgeous quilt. 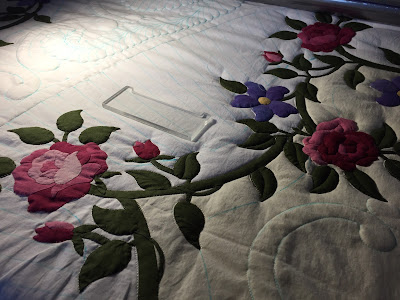 Leslie has beautiful workmanship which made this a pleasure to quilt. 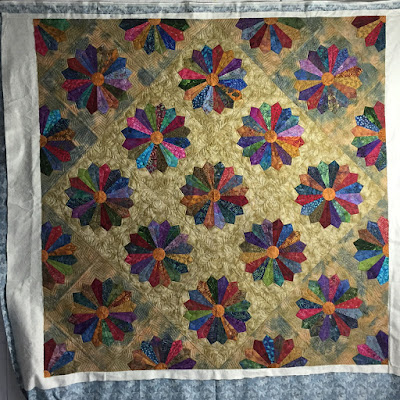 Beautiful choice of batiks for the top. 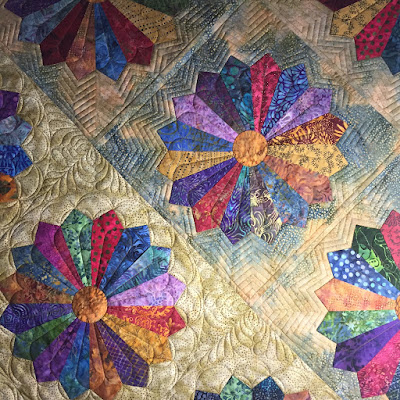 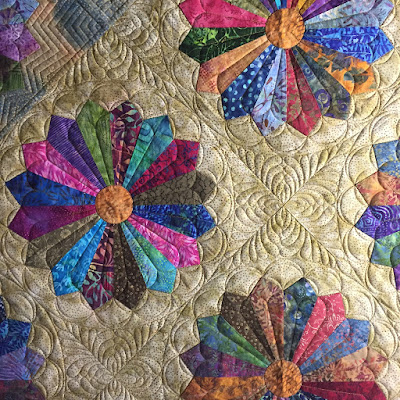 I'm doing a countdown of quilts for customers - this leaves ten to go before I 'retire' from customer quilting.


My guild, Prairie Quilt Guild in Wichita had a wonderful program yesterday.  I'm the program chair this year but traditionally the January program is planned by the workshop chair and has always been mini workshops.  Tammy, the workshops chair and I both thought the mini workshop idea had gotten old and stale.  It's awkward to present to our large guild of around 700 members and hard to find presenters from within the guild year after year.  Tammy had the great idea of asking guild members to bring their own vintage and antique quilts that had a story - quilts that had been handed down in their family or made by friends and relatives.


It turned out to be a wonderful program with beautiful quilts and heartwarming stories.  I hope our guild repeats the program in the future.  Here are a few of the quilts that especially appealed to me. 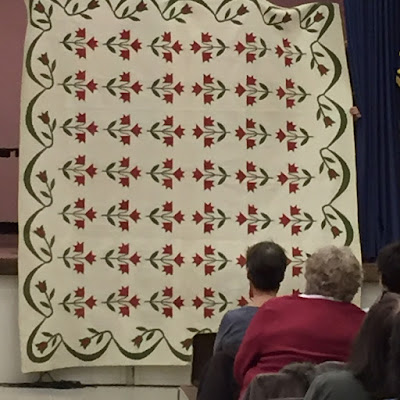 I twisted Cathy's arm so she would bring this quilt which I had seen in her home.  This is a family heirloom from around 1850 and is in beautiful condition.  She also brought several embroidered samplers from around 1840 made by the same family member.  She is so lucky to have these treasures and I know she appreciates them. 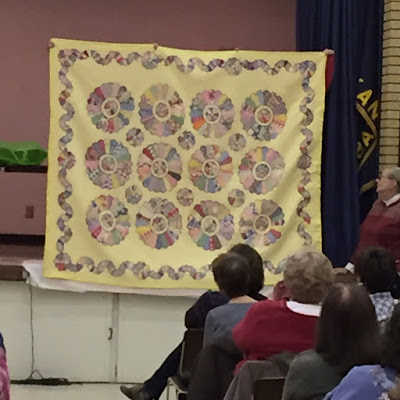 There were many quilts from the 30's and I especially liked this one that Debbie brought, made by a family
friend. 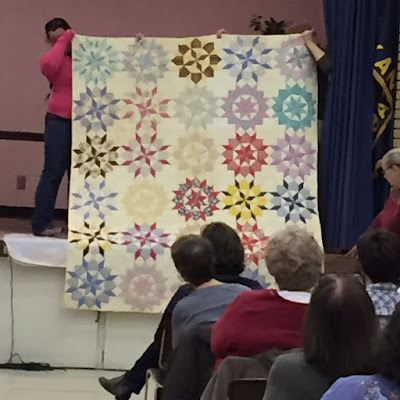 Donna brought this one and the pattern looks like a lot of quilts being made today, but it is an old quilt.

I got a new roof right before Christmas.  The weather co-operated and it was finished before more typical
winter weather set in. 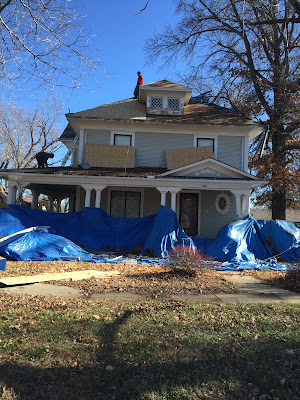 They found three layers of shingles that had to be removed. 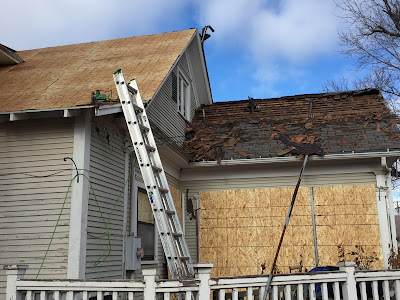 What a relief to have a new, un-leaky roof! 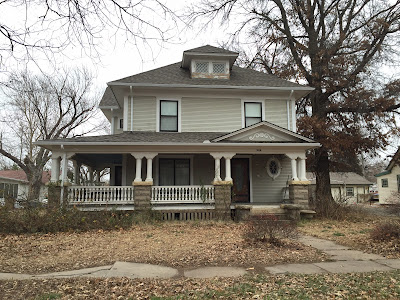