Four cranky cats and some quilts

Donna does such a beautiful job on her appliqued quilts.  She is making heirloom applique quilts for her grandchildren and I did another one for her several years ago.  This is her most recent quilt, it's a pattern by Edita Sitar and it is certainly full of applique!  The SID  alone took many hours to finish. 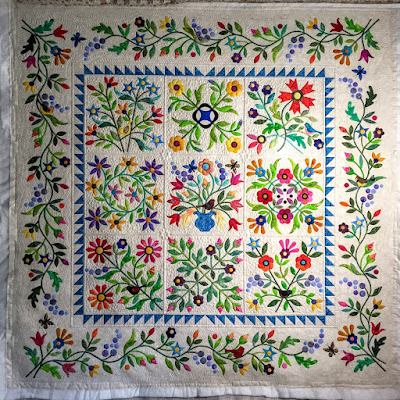 It is quilted with Bottom Line thread and has wool batting . 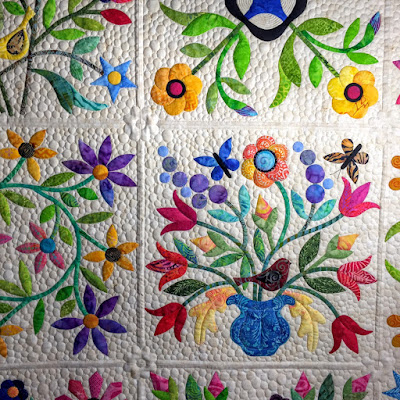 Donna requested feathers, curved cross- hatching and lots of frills and fills.  She got it! 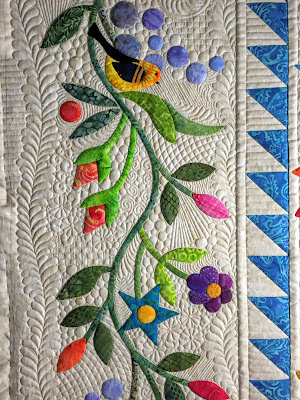 Wilma brought me her Mariner's Compass Sampler - a challenging pattern I would never be brave enough to attempt.  This quilt has So Fine thread and another wool batt. 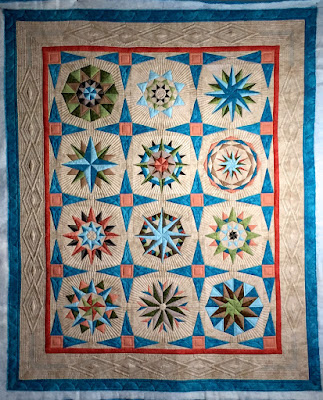 I asked her if I could use some colored thread in that wide tan border and a little silver metallic on the
turquoise. 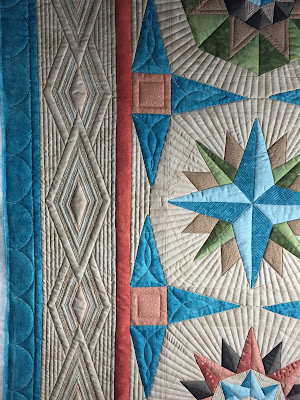 It's been so long since I posted - since before the AQS show in Paducah.  I drove there with my crazy road trip friends, Michele and Lori.  They are great fun to travel with and have been going to Paducah for years, so have the trip down pat.  They know the best places to stop along the way, all the best restaurants and quilt shops.
I was looking forward to the trip and to seeing my quilting partner Gail Stepanek, who also planned to attend.

AQS used to call the winners of the big awards once the judging was finished on Sunday. Gail enters our quilts and did not get a call but did receive an email saying we had won something, so we attended the awards ceremony Tuesday night expecting to hear we had won  1st, 2nd, 3rd or Honorable Mention.  Our category was announced at the end and we were biting our nails by that time.  They announced third - not us, then second - not us.  Yay, we thought, we have won first!  Then they announced first - not us!  Holy Bazoly -  it turns out we won one of the big awards!  We won the APQS Best Longarm Workmanship Award and our quilt, My Brunette Whig is now part of the collection of the National Quilt Museum  joining Mistaken Identity, our quilt that won the same award in 2014.  The only person that looked more shocked than us was Marilyn Badger when she won Best of Show - she hadn't received an email at all. 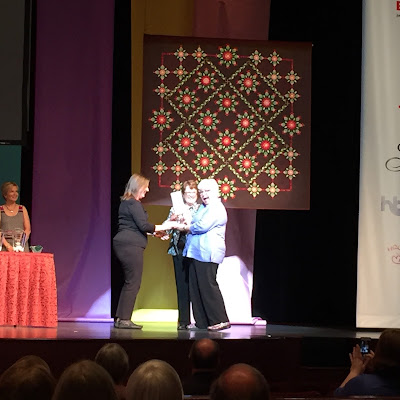 Gail and I are so honored and loved sitting in our chairs and meeting quilters from all over the world as they came by our quilt. 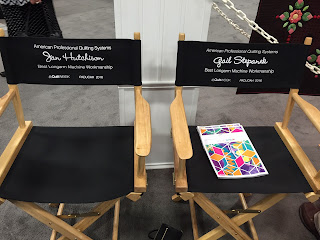 I was there all week so there was time to get out and about.  We ate strawberry shortcake prepared by Boy Scouts (and their moms !), 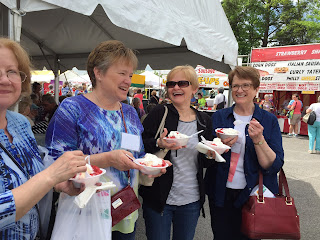 Lori, Michele, Heather and Gail
We visited the Purple Toad Winery and drove across the Ohio River to Metropolis IL to have our pictures taken with Superman.  I was impressed by his Big Boy Panties. 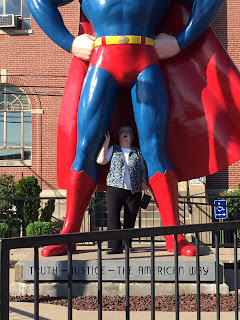 There was still plenty of time to shop at the show and we really had to pack stuff in for the drive home. 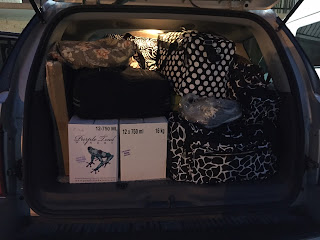 My main purchase was a new lightbox.  It's huge compared to my old one and lies real flat on the table.  It was expensive but will be wonderful to use on Gail's next quilt! 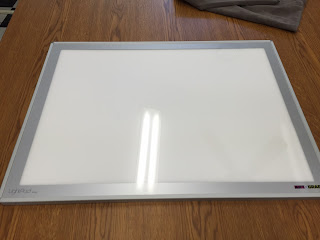 I was gone almost a week and arrived home to find four cranky cats waiting for me.  Elsie hid from me until the next day and then followed me around giving me this pitiful look: